Booth levels and sizes, whether in physical events or virtual, have been a traditional way to distinguish between levels of event sponsorship. The exciting part about virtual events is that for many smaller sponsors, the virtual sponsorship can “level the playing field” in some ways, as no longer is that 10 x 10 booth located in the back corner of the exhibit hall, where few attendees reach or circle back to for a second or third pass. 6Connex offers many ways to distinguish between sponsorship levels:

Offering content opportunities as part of a broader sponsorship package is another way to drive revenues or encourage your sponsors to sign up for the next-level sponsorship package. You can present this type of content via designated theaters or other spaces, including from within booths. Note that these sessions do not have to compete with your event theater sessions or webcasts; you can offer them at times you’re not offering other programming. You can do this as an extension of your event, as an option during your designated exhibit hall time, or after the fact in on demand. You can also dedicate rooms to product videos, highlighting a select group of sponsored material that attendees can watch at their leisure.

This is a robust feature offered only by 6Connex with many options that can easily be monetized. Clickable signs in a booth or room can be used for a wide range of purposes, including

In a virtual event, there are many options for interactive elements. You might offer attendees the opportunity to earn points, which they can use to win either recognition or prizes. Prizes can be as simple as branded swag or more coveted items like electronics, rounds of golf, or dinners with CEOs. You can reward not only interaction with content but also actions that support various organizational efforts. Some ideas tied to monetization include:

With a virtual event, sponsorship levels can also include a number of promised leads. For example, premium sponsors are guaranteed 500, 250, or 100 leads from the event. These leads are typically attendees who have visited the sponsor’s booth, attended a sponsored chat, or viewed sponsor content from any location within the event. But what happens when those numbers fall short at the end of the event when statistics are reviewed?

Event hosts can ask sponsors what attributes they value most in leads. Each sponsor might answer that question differently, so it’s a good idea to offer a few suggestions, such as where the attendee is located (perhaps it’s a state or country), their job title, industry, or whether that attendee viewed the keynote address, for example. 6Connex’s robust reporting drills down to many attendee factors, allowing the hosts to create lists of attendees who have exhibited certain behaviors in the event or who provided certain answers on their registration form with specific answers. These lists can then be compared to attendees who visited a sponsor booth, deduped, and provided to sponsors to complete the promised lead numbers.

While a physical event is broken down once the show dates pass, an on-demand period, which might last from a few weeks to up to a year, can follow the live days of a virtual event. Use this time to showcase additional sponsors through messaging, continued marketing, and even new webcasts hosted by these sponsors, which also add value for attendees and can drive new registrations, resulting in new sponsor leads.

Look for Part 3 of this blog series, in which the focus will be on revenues driven through attendees. 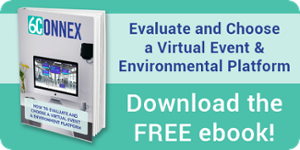 What Is the Shelf Life of Your Conference?